With the arrival of Governor Hindmarsh on the Buffalo on 28 day of December 1836, the new private colony of South Australia was proclaimed.
The State was established through the formation of a private company in England known as the South Australian Company.

On 16 June 1837, the Colonial Commissioner, Sir James Hurtle Fisher, Mr John Morphett, Colonel William Light, and a party of marines set out from Glenelg intending to travel overland to Encounter Bay to visit whalers who were employees of the South Australia Company. Colonel Light’s diary records – “At 4pm the party arrived at a beautiful valley, where they encamped for the night; the country and soil together adapted for grazing or agriculture; the whole distance was not more than ten or eleven miles from Glenelg”. This area was named Hurtle Vale after the Colonel Commissioner.

The South Australia Company’s Surveyor-General, Colonel William Light, was charged with the surveying of the land into 80 acre allotments ready for sale to the new settlers to South Australia. One of his team was John McLaren who was responsible for surveying Sections B, C and D to the south of Adelaide.
This task was completed in 1839 and the first survey maps printed in 1840.

A later map drawn by John McLaren in 1857 shows the areas covered some 107 x 80 acre allotments, stretching from the hills in the east towards the coast in the West with the Field River running through the centre of the valley.

The name Hurtle Vale was never officially registered as a geographical name although widely used in the community for some time. Today the suburbs of Happy Valley, O’Halloran Hill, Trott Park, Sheidow Park, Reynella and parts of Hallett Cove, Morphett Vale and Woodcroft can be found within the old definition of Hurtle Vale.

The “Surry” anchored at Holdfast Bay on 16 October, 1838. Saloon passengers included Thomas and Catherine Lucas and family, his brothers Frank and William and his sister Mary aged 36 years. Also on board was John Reynell aged 29 and his cousin Samuel aged 20.
During the voyage John and Mary became engaged.

John and Samuel rented a house at 81 Rundle Street in Adelaide shortly after arriving, while the Lucas family including Mary, settled in Surryville, which was located on the banks of the Field River (Section 499).

John Reynell was primarily a farmer, as indicated by an entry in his diary, which states in November/December 1838 he was busy planting potatoes on the flats near the Field River and caring for the stock he bought out with him.

John and Mary were married at Holy Trinity Church in Adelaide on 31st January, 1839 and continued to live in Adelaide, while still renting the cottage at Surryville until he was able to purchase his own section of land.

On 12 March 1839, Section 524 was granted to Thomas Lucas who immediately rented it to John Reynell until the Indenture for Sale was drawn up on 26 August 1839, when John agreed to pay Thomas and Catherine Lucas £80 for the 80 acre section.

In 1839, John Reynell claimed he was the first settler to enclose an entire 80 acre section. A little later he had to cut the fences to allow for the alignment of a proposed road for the passage of a regular mail run to Encounter Bay which was established by the end of 1839. 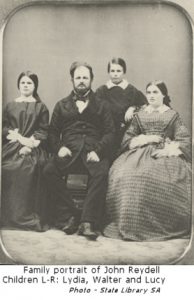 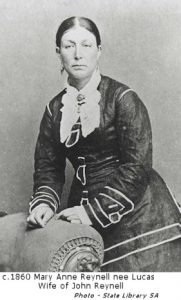 By 1854 there was a demand for land for housing in the area and in February of that year, John Reynell drew up a Notice of Sale for a portion of his Reynella Farm (Sections 523 and 524) for the establishment of the township of Reynella.

Sections of paragraphs from the Notice are as follows:-

“Sale by Auction of the township of Reynella, to be sold on the land on Wednesday, 12 April 1854 by order and for account of John Reynell Esq. We have received instructions to submit to public competition this promising township ….
“The township consists of about 40 acres of land divided into allotments varying from one quarter to two acres with the Great Southern Road dividing it equally from North to South …”
“A fine flour mill of four storeys is already erected in the township and a handsome Hotel is in rapid progress and will be open by winter.”
“The auction will be held at the Mill, and in the grounds luncheon will be prepared and where required facilities will be afforded in the way of payment. Further conditions at time of sale. Title indisputable. Plans may be seen at Hay’s, Tapley’s Hill, The Emu, (early hotels in the district) and also at the Blacksmiths shop on the ground”.

Resource:
(Information taken from signs designed and produced for the City of Onkaparinga by M & H Harrington Enterprises and Armsign Pty Ltd.) 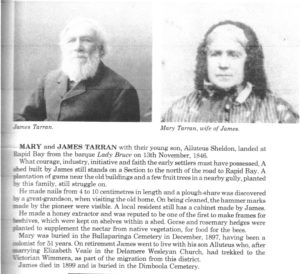 The history above is an excerpt from the REDMAN family history. James and Mary’s daughter Esther Australia Matilda Tarran born 1846, married Thomas Wright Redman in 1868 at Tarran’s farm at Rapid Bay. The family home still exists and is on the right hand side near the bottom of the hill into Rapid Bay and is used by the current owner of the land for storage. It is visible from the road and alongside the current owner’s house.

Esther is this writers great grandmother. Thomas Redman died in 1890 and Esther remarried in 1891 to Charles Cox.

Sorry about blurred image above, which gives James and Mary’s history as known, and died in 1899 the same year as his daughter Esther.

So the write up above tends to show that James and his family were well known in the Rapid Bay area.